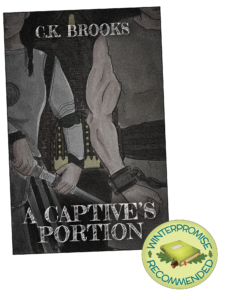 Captives by birth, two of Sanvar’s orphans resist the menacing forces of an empire that trains children to fight for the entertainment of its citizens.

Silas Carter has survived brutal years of training in an orphanage, only to exchange this existence for a darker fate as a gladiator, grappling with the culture of death that stalks the ring in which he is forced to fight. Struggling with the choice he must make again and again — whether to kill in the ring or accept death on his own terms — Silas holds on to the slim hope that victory will allow him to do away with the games once and for all.

Across the empire, Isla Eliseus faces starkly different choices. Serving the emperor himself, she is witness to the brutality of the gladiator games and senses they are just a small part of the ominous plans Bandero has for Sanvar and its citizens. When an opportunity arises to undermine the dark future Bandero envisions, Isla’s course is set as a spy and enemy of Sanvar.

As the games go forward, events bring Silas and Isla together, forcing each to face the consequences of their resistance to the empire and its calculating emperor.

In A Captive’s Portion, the reader is pulled immediately into a Greco-Roman-like world as they follow the events created by the choices of Isla and Silas. Characters and their backstories are well-developed, a mixture of admirable qualities and relatable flaws. Villains are complex with elusive motives, at times likeable, at times forbidding. Silas and Isla face internal conflict that will resonate with today’s readers: dealing with hope and betrayal, managing obstacles, facing self-doubt, finding one’s place in the world, and overcoming life circumstances beyond one’s control. Scenes of gladiatorial conflict are vivid, leaping to life in the reader’s imagination, yet focus more on character conflict than the violence of the ring.

As the tale unfolds, the reader will find reflections of themselves in many of the characters, and perhaps even in the crowds who play their part in the human drama, standing by and cheering on the unthinkable waste of human lives. The story, fastmoving and with twists and turns along the way, raises the question of human value and what one is willing to sacrifice to protect the vulnerable.

You may purchase this book in ebook format at Google Play, Kobo, Barnes & Noble and Amazon Kindle.

You may purchase a print copy at Amazon.

Integrating the Outdoors into Your Homeschooling
Scroll to top